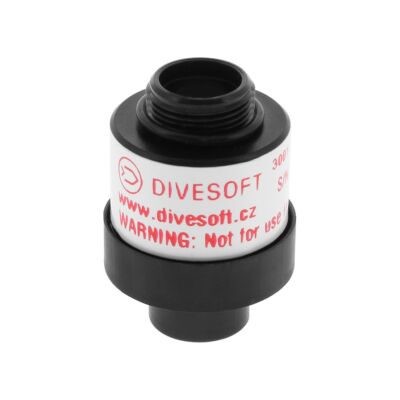 The Divesoft 22S Oxygen Sensor is a Divesoft branded replacement for the oxygen sensor with a three pin Molex connector in the Divesoft gas analyzers. The sensor is also a plug compatible replacement for R-22S type sensors found in other gas analyzers such as Cochran Lifeguard, DiveTek Oz, DiveNav cootwo, Mares EANx, and OxySpy analyzers. Lacking a hydrophobic membrane, this sensor is NOT suitable for use in any rebreather.

The sensor’s accuracy is ± 1% full scale. Typical life of this type sensor is 36 to 48 months depending on usage and amount of oxygen being analyzed, but can be as little as 12 months in frequent shop use. Divesoft warranty of sensor life is 12 months.

We are occasionally asked about availability of the helium sensors for the Divesoft Trimix analyzers. They are available by special order, but Divesoft tells us that the helium sensors are not consumable, and expected to last the life of the analyzer.

Oxygen sensors are one of the very few items on our website that are NOT returnable, because we can't know with absolute certainty how they were handled once delivered. Additional shipping and handling of the return can also degrade performance. They are critical to safety in diving, and our customers have a reasonable expectation of receiving as factory fresh a product as possible from Dive Gear Express. Your complete satisfaction is our goal, so please consider carefully before purchase.

The R-22 and R-17 type oxygen sensors in diving

Teledyne Analytical, a early pioneer in the development of galvanic oxygen sensors, manufactures a variety of sensors for different applications. The R-22 models are all characterized by the same physical dimensions and 3-pin Molex connector; the R-17 models are similar but with an 3.5 mm mini-jack connector. They output approximately 10 mV in ordinary air at one atmosphere (i.e. 0.21 ATA partial pressure of oxygen) and room temperature with an average lifespan of about 36 months. In elevated oxygen pressures the mV output is much higher and the lifespan is much shorter. The various models differ internally in order to support specific applications such as automotive (R-22A/R-17A), medical (R-22MED/R-17MED), and gas analyzers (R-22S/R-17S). Early versions of modern rebreather designs incorporating oxygen sensors used those models (because it was what was available), but the sensors are sensitive to the high levels of humidity found in rebreather loops. Teledyne later offered "D" versions for the diving market (R-22D/R-17D) that improved their resistance to moisture.

In the 2000's, Teledyne Analytical had to defend the sensors in several (frivolous?) lawsuits associated with rebreather fatalities. Although the sensors were never found to be at fault, Teledyne ceased manufacture of the diving grade models because the litigation costs to defend the sensors exceeded the value of the very small rebreather sensor market at the time. Several other competing manufacturers began to offer plug-compatible replacements for the now discontinued R-22D/R-17D models. Over time those other manufacturers have made significant improvements to the original design, although the physical and connector specifications have remained the same. They are often still generically referred to as "22D type compatible" or "17D type compatible" after the original Teledyne model number, although Teledyne has not resumed branded production of diving grade sensors.

The primary difference between the "S" type sensor and the "D" type sensor is the presence of a hydrophobic membrane on the face of the diving grade sensor. The membrane improves resistance to moisture, but slows the response of the sensor to changes in oxygen partial pressures by several seconds. In practice, for use in diving gas analyzer applications the slightly slower response time of diving grade sensors is little consequence with the benefit being the design is more resistant to moisture found on the face of tank valves. If the diver or fill station operator fails to wipe or blow away any moisture present on the valve outlet, that moisture can enter the stream of gas being analyzed and affect the accuracy of the analysis. Some prefer to use the D type sensors even in analyzers because of their resistance to moisture, others prefer the S type sensors for their slightly faster response time in analyzers - especially in frequent use applications. Both types will work in gas analyzers but the S type must never be used in rebreathers.