Various LED dive light suppliers use different methods of determining light output, plus expressing them in different forms of measurement. What matters is the visible light from the LED that bounces off the reflector and passes through the lens. The quality of the reflector and lens, as well as the actual amount of power delivered by the battery have a major affect on the amount of light that reaches the target. Describing any LED dive light in terms of the specification of the entire output for a raw LED module without reflector and lens at maximum power under laboratory conditions is very misleading. Dive lights would be better described by the system lumens (sometimes called out-the-front or OTF lumens), which is the amount of visible light emitted by the entire system of housing, battery, electronics, diode, reflector and lens.

In our opinion, using lux measured at the target distance (typically 1 or 2 meters), and not just initially but graphed across the entire burn time, is the best way to describe the brightness of dive lights. The difference is that the lux takes into account the area over which the light beam is spread and thus the beam angle. The lux is the visible light measured at the target distance, not the bulb. A light of 1000 lumens, concentrated into an area of one square meter, is said to illuminate that square meter with an brightness of 1,000 lux. However, the same 1000 lumens, spread out over ten square meters, produces a much lower value of only 100 lux.

There is a test standard (ANSI/NEMA FL-1, approved in 2009) for measuring flashlight lumen output, burn time and impact resistance. Sadly, we are not aware of a single dive light manufacturer who has elected to rate their lights using the FL-1 standard. Until they do, we must rely upon our supplier internally published specifications for our descriptions, but we suggest you take all of them with a grain of salt. Like the fuel economy ratings on automobiles, your results for light output and burn times may vary considerably from the questionable values being published by the dive light manufacturers. 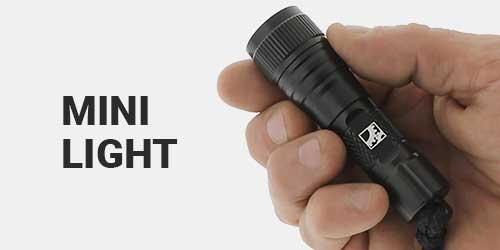 Why did my flashlight or strobe flood?

Most often the reason is a dead battery plus an error by the diver that causes their handheld "twist on/off" flashlight to flood. The diver twists the light in one direction to activate and nothing happens, so the diver twists the light in the other direction attempting to activate and nothing happens. Then the diver keeps twisting in wrong direction, breaks the O-ring seal and it floods. Other less common reasons are failure to maintain correct amount of lubrication on the sealing O-ring(s); dirt, hair, or salt introduced on the O-ring(s) or sealing surfaces when loading batteries; over-tightening the light head and body together; and finally leaving batteries (especially alkaline chemistry batteries) stored in the light over a long period of time.

Where is the DGX handheld light manual?

There isn't a manual, however there is not much to know. To load batteries in the DGX lights, unscrew the head from the body until the two pieces separate and then insert the battery or batteries in to the body, negative end first such that the positive end will be pointing toward the light head. Hold the head and screw the body clockwise back together all the way until it stops. Briefly push and release the button on the models with a switch to turn the light on or off. To turn off those models without a switch, twist the body counterclockwise until the light goes off then continue to twist the body one half revolution. Once assembled, the twist-on model lights should require a maximum of about one full revolution to turn on or turn off. Do not store any handheld light for extended periods with batteries remaining inside the device because over time batteries can self-discharge and then leak acid.

That's all there is to it, some models also include a little bag of spare O-rings should you need them. There is nothing special about the lubricant, any generic silicone O-ring lube used with underwater equipment will work. If the O-rings ever start looking dry, leave them in place but smear a very small amount of lubricant on the part of the O-ring surface you can see. You might also benefit from reading How to Use a New Twist-On Handheld Dive Light.

How does the battery charger work for DGX lights?

Some DGX lights include a generic battery and charger, but any good quality protected-type 18650 battery and charger is suitable for the DGX 600/800 lights. They all pretty much work the same way and are interchangeable. Some batteries ship with a small adhesive cover on the ends, if so remove and discard. Place the battery in the charger, matching the positive and negative indications on the sides of the battery to the same indications on the charger, and then plug in the charger. If the battery is properly positioned in the charger, a red light will illuminate or blink and then some time later change color to green when done. Charging time varies considerably depending on the pre-existing charge level of the battery, typically 3 to 5 hours but can be as long as 6 to 8 hours for a depleted battery, and it's normal for batteries to get warm while charging. Best practice is never leave charging unattended then once the light turns green, unplug the charger and remove the battery.

What is the difference between the BUTTON and TWIST style DGX handheld lights?

They are very similar, however the BUTTON version enables multi-function power on (that is not available in the TWIST) offering a HIGH and LOW lumen output and a safety STROBE setting. The area around the button feature is illuminated and will give an approximate battery life remaining notification with color changes.

Most experienced divers prefer the simplicity and reliability of twist-on style lights, but divers can become confused about the twist direction and flood their light. The button-on style light is less likely to flood as a result of user error, but the mechanical nature of the button switch itself is an additional point of failure not present in the twist-on design.

The choice between twist-on or button-on styles is mostly a matter of personal preference, but we do have recommendations for a few specific applications. Button-on style lights are easier activate when used with hand mounts or helmet mounts. If you are mounting the light, we recommend the BUTTON style. If the light is being carried as a handheld backup to a primary, we recommend the TWIST on style. Better yet, if taking two backups for technical diving we suggest one of each style.

Where can I get replacement batteries?

For devices that can accept individual standard batteries we recommend purchasing quality replacement batteries through local brand name high-volume merchants such as "big-box" retailers and battery specialty stores. For devices with custom size rechargeable battery packs, such as older canister style dive lights and DPV's, our recommendation is to contact the service department of the original manufacturer to arrange a return authorization. For our detailed recommendations on where to purchase and where not to purchase replacement batteries, read our TekTip titled Replacement Battery Solutions.

Where can I get support for my Paralenz camera?

In October 2022, the Paralenz company unexpectedly announced they had ceased operations and filed for bankruptcy. Their announcement stated in part for "queries about your camera repair and general support, please contact lawyer Christina Andersen [email protected]". Our expectation is that at least for the near term no factory support or service is currently available, although the announcement also stated there are efforts to restart the company.