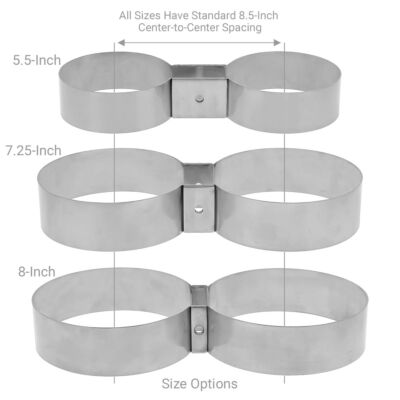 The set of two heavy-duty Premium Doubles Bands are constructed of 304 stainless steel, with a polished satin finish. They are tungsten inert gas (TIG) welded, passivated, and have deburred edges that minimizes scratching tanks during assembly. Available in three different sizes to fit a variety of different cylinder diameters, all three sizes have bands that are {2.5 in | 6.35 cm} wide.

All the bolts, nuts and washers included in the kits with these bands are also made of stainless steel. The 5/16-18 all-thread headless bolts allow you to precisely adjust the bolt height to perfectly fit any brand or size of backplate and wing assembly. The aircraft nuts are 1/2-inch across the flats, but the hex nuts are the next size larger at 9/16-inch. Using two different sized nuts with the same threads allows the convenience of using a single set of wrenches for assembly.

Assembling a set of doubles is easy if you follow the DETAILED ASSEMBLY INSTRUCTIONS we provide.

Choose the Appropriate Size Tank Bands for Your Cylinders

Evolution of Manifolds and Bands

In the early 1980's there were few double tank manifolds available. Divers had a choice of a dual outlet metal-to-metal seal manifold from one manufacturer or a single outlet double barrel o-ring seal manifold from another manufacturer. Manifolds during this period did not have crossbars with isolation valves. The center-to-center spacing on these manifolds was for the 6.7-inch diameter steel 72s and the 7.25-inch aluminum 80s, which was tight for the increasingly popular 8-inch diameter steel 95s and 104s. The tight spacing meant bolts could rub against the tanks and the bands were prone to gapping.

In the late 1980s, more dual outlet manifolds became available with several choices for seal design and centers spacing. Specialty band manufacturers also entered the market and offered a variety of band sizes and types for use with different manifolds and tanks. Some manufacturers used tack welds that would allow the bands to flex in accordance with the size of the tank, rather than manufacture multiple sets of bands. The tack weld approach required care during assembly because the welds would separate if the assembler were to over-torque the bolts.

Today, the new generation adjustable 8.5-inch center-to-center spacing manifolds provide up to 0.25-inch of adjustability so that tank bands fit properly even when there are minor variations in tank dimensions. If you have a manifold with double o-ring seals and adjustable spacing, you should not need a specialized tank band. Our article Assembling Double Cylinders makes it easy.