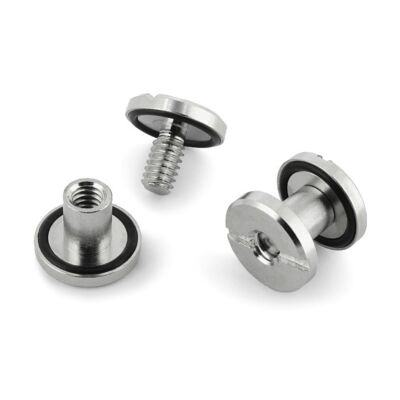 Designed to fit through a 3/8-inch hole, the metal assembly screws include o-rings to help keep the screw in place.

Marine grade chrome-plated brass, sold as a set of two.

Note: we do NOT recommend using these screws to secure wings to backplates. The metal screws will not allow the cylinder to lay flat and in addition they may scratch your tank. We suggest you use the plastic assembly screws for that purpose.

We sell these somewhat archaic products because there is still demand, but we don't recommend them under most circumstances. Modern plates and wings have been designed to eliminate the need for either a single-tank-adapter (STA) or book screws (aka assembly screws, aka 'sex-bolts'). Divers want the most stability possible when the harness, backplate and wing (BPW) is assembled on the cylinder. The reason many divers dislike using an adapter or book screws is they actually make the assembly of the tank straps, backplate, and wing more unstable when mounted on the cylinder. Using either an STA or the screws will prevent the wing and plate from being as tight as possible against the cylinder and may allow the the plate to pivot back and forth slightly (aka tank-roll). Also, using either the screws or an STA will interfere with the built-in stabilizing pads feature some recent single tank wing designs now include (such as the DGX Gears S1 and OMS Performance Mono) in order to better conform to the cylinder shape and control tank-roll. Just to be clear, a single-tank-adapter or assembly screws are also never necessary with banded doubles (aka 'twinset') setups.

Plastic screws can be used to attach the wing directly to a hard metal backplate when rigged for a single tank without a STA. However, their function is just cosmetic; omitting the assembly screws does not cause a problem. Without the assembly screws, when the BPW is taken off a single tank, the wing will just hang loose on the cam straps. Adding the screws creates two small high spots that prevent the cylinder from being tight against backplate and allow the assembly to rock slightly by pivoting on the heads of the screws. Even worse, if the screws are metal they are also subject to galvanic action and cause wear on materials rubbing against them which can damage the surface of the tank and encourage corrosion. The modern plate, wing and cylinder assembly will be more stable and secure by omitting the book screws.

With modern backplates and single tank wings the use of either a single tank adapter or book screws can be counterproductive and is not considered to be best practice.