Due to restrictions on shipping batteries for international delivery, we must limit this light to only two per order. 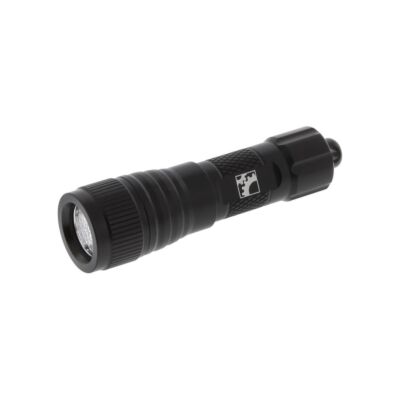 Due to restrictions on shipping batteries for international delivery, we must limit this light to only two per order.

Offering 300 lumens and depth rated to 492 feet, the DGX 300 Mini Light features a true out-the-front 300 system lumens (600+ raw LED lumens) of cool white 6500°K light in a 18° beam. Twist the light head portion for ON/OFF activation with a double O-ring seal. Using the supplied lithium-ion AA sized 14500 rechargeable battery, this compact light has a burn time of about 30 minutes at full power † . The light will then start to fade but will continue to burn until the battery is depleted and ready to be charged again. This light will also accept a standard AA Alkaline battery. Using a standard AA Alkaline battery(not included) you will get longer burn times with reduced lumen output (about 125 lumens). According to CREE, the DGX 300 has one of the highest performing single-die LEDs that is commercially available, the XLamp XM-L2 U2 LED, and is single-mode driven to prioritize light output over burn time.

Incorporating an optical quality glass lens with a double o-ring seal between the head and body, the light is IP68 rated to {492 ft | 150 m}. The switch design is twist ON/OFF at the head; unscrew the head completely from the body to load the battery. The tail has a sturdy rear tie-point for a bolt snap or use the included lanyard. The light has an electronic circuit to maintain constant light output as long as possible and provides reverse polarity & over temperature protection; meaning the DGX 300 can also be used as a dry flashlight on the surface. The anodized aircraft aluminum body measures {3.6 x 0.8 x 0.7 in | 93 x 21 x 19 mm} (length x head diameter x tube diameter) with a dry weight of {2.5 oz | 71 gm} including the battery. Use the TTI-1004 Generic Mounting Bracket (Small) for helmet mounting this light.

In The Box -- The DGX light head and dual O-ring seal body with lanyard, plus a set of two spare O-rings The DGX 300 also includes a lithium-ion 14500 protected 3.7V battery and 110/220V 50/60Hz mains charger with US flat blade on the charger - an EU round mains plug adapter is available separately.

There isn't a manual, however there is not much to know. To load battery, unscrew the head from the body until the two pieces separate and then insert the battery in to the body, negative end first such that the positive end will be pointing toward the light head. Hold the head and screw the body clockwise back together all the way until it stops. To turn off, twist the body counterclockwise until the light goes off then continue to twist the body one half revolution. Once assembled, the twist-on light should require a maximum of about one full revolution to turn on or turn off. If the O-rings look dry, leave them in place but smear a very small amount of silicone lubricant on the part of the O-ring surface you can see. If the O-rings start looking flat, then replace them with the included spares. Do not store the light for extended periods with the battery remaining inside the body. You might also benefit from reading How to Use a New Twist-On Handheld Dive Light.

The DGX light includes a generic battery and charger, but any good quality protected-type 14500 battery and charger is suitable. They all pretty much work the same way and are interchangeable. Some batteries ship with a small adhesive cover on the end, if so remove and discard. Place the battery in the charger, matching the positive and negative indications on the sides of the battery to the same indications on the charger, and then plug in the charger. If the battery is properly positioned in the charger, a red light will illuminate and then some time later change color to green when done. Charging time varies considerably depending on the pre-existing charge level of the battery, typically 1 to 2 hours but can be as long as 4 hours for a depleted battery, and it's normal for batteries to get warm while charging. Best practice is never leave charging unattended then once the light turns green, unplug the charger and remove the battery.

† Burn times with the supplied battery are a conservative estimate for technical diving use. Burn times can vary widely because we observe that most brands of lithium-ion 14500 batteries grossly over state their power rating claims.