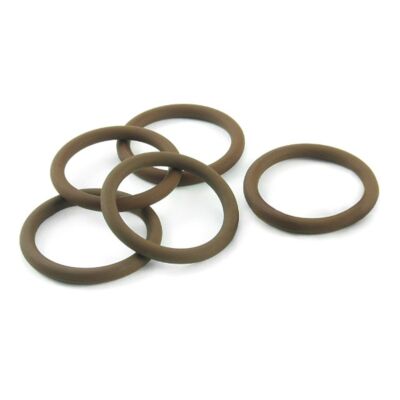 These fluorocarbon elastomer (aka Viton®, aka FKM, aka FPM) oxygen resistant O-rings are brown color and 90-duro (except for the -003 & -006 O-rings, which are 75-duro). They are well suited for the SCUBA applications we describe, especially suitable for use with Nitrox. Five of the size O-ring you select are packaged in a resealable plastic bag that is properly labeled with the size.

Designers of modern SCUBA equipment often specify O-rings with special properties and materials for specific uses inside their equipment. The special o-rings are supplied as part of original equipment manufacturer (OEM) service parts kits. Substituting any other generic O-ring just because it's the right size can cause difficult-to-diagnose problems and degrade performance. Improper service could cause a failure which would have serious and life threatening consequences.

The ISO 12209 standard specification for dimensions of the O-ring groove in the nose of the 232 bar and 300 bar DIN connectors for compressed air has an inside dimension of 12 mm and an outside dimension of 17 mm. In 2003, the standard depth for the groove was revised from the original 1.9 mm to a slightly deeper 2 mm. The specification for the sealing O-ring itself is an inside diameter of 11.2 mm with a cross section of 2.65 mm. From what we have been able to determine, not all SCUBA regulator manufacturers seem to use the current standard groove and O-ring in the universal DIN fittings found on their first stages.

The sealing O-ring in the nose of the DIN connector groove we find on most SCUBA regulator first stages is commonly an SAE AS568 and BS ISO 3601 imperial standard 112 size that is equivalent to 12.37 X 2.62 metric dimensions. In the case of a few regulators (notably Apeks, Atomic, and ScubaPro brands) their groove better accepts the next smaller 111 size O-ring that is equivalent to 10.77 X 2.62 metric dimensions. Both the 112 and 111 size O-rings are very common sizes available in a variety of choices for material and durometer. The groove in the Cressi and Poseidon brand regulator DIN connectors measures closest to the original standard, best accepting a BS ISO 3601 metric size O-ring with 11.3 X 2.4 dimensions for which there is no imperial standard equivalent. The M2.4X11.3 size O-ring is uncommon, especially in a material suitable for use with Nitrox. (FYI, the O-ring in standard CGA-850 Yoke K-valves is easy, it is always an 014 size. However, there are some very rarely seen older K-valves that pre-date the CGA-850 standard which might use other o-ring sizes. )

In the European Union nations, the EN 144-3:2003 standard requires a valve outlet known as M26x2 to be used on dive cylinders containing oxygen or Nitrox mixtures with greater than 22% oxygen. The M26x2 outlet is similar in appearance but slightly larger than the standard DIN outlet, and thus incompatible with the standard DIN connector found on SCUBA regulators. The purpose of this incompatible valve outlet is to force the dedication of cylinders, regulators and fill stations to Nitrox use. The sealing O-ring in the nose of the M26x2 connector is 13.9 X 2.6 metric dimensions, equivalent to the 113 size. The M26x2 outlet and connector for Nitrox and oxygen is very rarely seen outside the EU.

For more about O-ring standards and materials used in diving applications, read our Sizing and Selecting O-rings for SCUBA TekTip.