If you are purchasing this with no other physical items... please choose In-Store pickup for your shipping method. We will email you the unlock code.

This version of the product should be selected if you are ordering for a Shearwater dive computer you already have. If you you want to add VPM when ordering a NEW Shearwater Dive Computer from Dive Gear Express, then an option is available on the dive computer page to order VPM with the computer.

Please supply your Serial Number in the dialog box above. The unit serial number (eight hexadecimal digits) and firmware version number are shown in the information displays (aka status screens) of your Shearwater dive computer. Repeatedly pressing the Select Button (Right), from the main display, will cycle through the various information screens. See the user manual for more information. Note that the serial number is NOT the CE certification EN13319 found on the outside of the case. 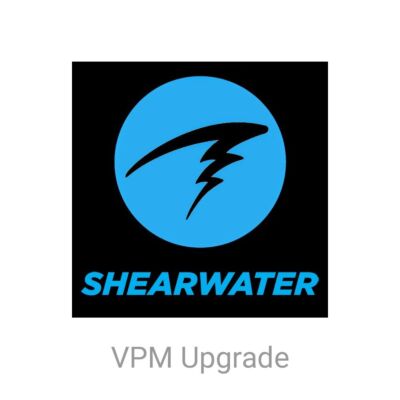 The VPM upgrade is supported only by the current firmware version of your Shearwater Predator, Petrel, Petrel 2, Perdix, Perdix AI, NERD, or NERD 2 dive computer (but not the Teric and Peregrine models) and only when set in technical open-circuit or rebreather modes (i.e. recreational open-circuit mode is always Bühlmann). An unlock code to enable the feature in the firmware is returned to you via E-mail within 72 hours.

The Varying Permeability Model (VPM) is a decompression algorithm that attempts to predict the behavior of bubbles within the human body during decompression. Compared to typical Bühlmann profiles, VPM dive profiles often have deeper initial stops that are believed to reduce bubble formation, along with reduced time at shallow depths. VPM-B (a version that includes adjustments for Boyles Law effects) is popular among the technical diving community for use in calculating dive tables with required stops. The algorithm was initially developed by David Yount based on laboratory observations of bubbles under pressure and coded into Fortran by Erik Baker. Shearwater Research has implemented VPM-B according to the original Erik Baker Fortran specification. VPM-B allows a conservatism factor to be adjusted over a range of 0 (least conservative) to +5 (most conservative), the default is +3.

In addition to implementing the Baker reference version, Shearwater Research has added an enhanced version because some divers believe the reduced shallow depth stop times may be too short for lengthy VPM-B profiles. The Gradient Factor Surfacing (GFS) option adds conservatism to the shallow stops on dives with significant decompression requirements (dives with total required deco exceeding an hour.) The GFS option is a hybrid that automatically chooses the decompression ceiling from the more conservative of the VPM-B profile and a Bühlmann ZHL-16C profile. For the Bühlmann profile a single gradient factor is used, adjustable over a range of 70% (most conservative) to 99% (least conservative), the default is 90%.

Recent decompression research has called in to question the benefits of deep stops; for more information see the TekTip and video below.

You will receive your VPM code as soon as possible, typically in a few hours. The controlling factor is the exact time of day you place your order and how that relates to Shearwater's office hours. The VPM code is generated manually from your serial number by the Shearwater office staff and it can be as long as 72 hours if you place your order on Friday afternoon before you receive the code by e-mail on Monday afternoon.

Among many long time technical divers a trend toward significantly deeper initial stops developed, based mostly on anecdotal reports within the community that some divers 'feel better' after such dives. This trend was a factor leading to an increased popularity of the VPM algorithm because those dive profiles typically have deeper initial stops, along with reduced time at shallow depths resulting in a 'smoother' profile. However more recently the whole concept of deep stops, and the VPM algorithm, have come under increasing criticism from the community of decompression experts. Some believe the dubious benefits of deep stops have been over-emphasized, especially for deep diving on trimix. Some dive computers such as the Shearwater models, offer VPM as an alternative for those divers who still prefer the VPM algorithm, although Shearwater recommends their default of Bühlmann with a 30/70 gradient factor. If you don't understand the differences and why you would choose one algorithm or the other, Dive Gear Express recommends using the factory defaults.