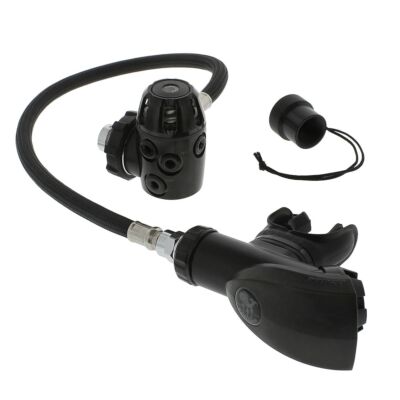 The Xstream Black is approved for depths to { 656 feet | 200 meters} through NORSOK, a Norwegian certification body specialized in certifying equipment used in the oil fields of the North Sea. As the premier side breather, the Xstream offers incredibly easy breathing and assures you have enough gas regardless of workload.

This package is assembled by Dive Gear Express using Poseidon first and second stages, together with our flex or rubber hose in your choice of length and also includes a free Delrin DIN Cap.

The low-profile compact Xstream second stage uses pilot-operated upstream demand valve technology that also seals the seat without the use of conventional knife edge design seating systems. This servo-assist feature allows for very low inhalation effort and also eliminates any need for a venturi switch or adjustment knob. The second stage is also ambidextrous, allowing both left and right hose routing and breathes equally well in nearly any swimming position while the side mounted exhaust directs the bubbles out of the field of vision.

Today most diving regulator second stages are simple self-operated demand valves that offer lower cost and performance good enough for most recreational diving. However, second stage diving regulators offering maximum performance are based on the pilot-operated demand valve. The pilot design multiplies a tiny change in pressure triggered by the start of the inhalation into a large change applied to deliver the breath. This feature is sometimes also referred to as 'servo-assisted', similar to the power brakes on an automobile. A major benefit of servo-assisted second stages is their outstanding work-of-breathing performance at technical diving depths.

The pilot-operated demand valve enables the breathing chamber to be shaped like a tube rather than a hockey puck, with a diaphragm, purge and centered exhaust valve combination at one end of the tube. This design allows the second stage to breath equally well in nearly any swimming position (remaining dry even when the diver is upside down) and the side mounted exhaust directs the bubbles out of the field of vision. The diaphragm and purge are at an angle to the front of the regulator, meaning side breathing regulators resist free flow in current and are an excellent choice for use with diver propulsion vehicles (DPV). The second stages are also inherently ambidextrous, allowing both left and right hose routing without reconfiguration.