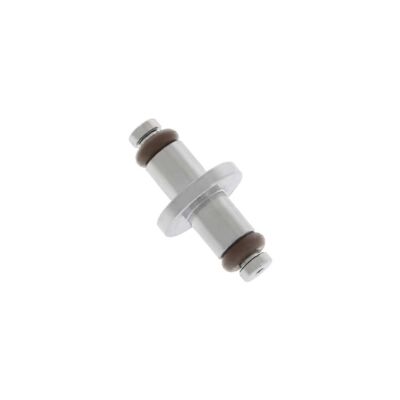 The standard air spool with a flange in the center and compatible with most submersible pressure gauges (SPG) and high pressure SCUBA swivel hoses. The air spool is not included with hoses but we recommend replacing the air spool when replacing the hose. Nitrox Ready, the airspool includes two oxygen compatible #003 viton o-rings.

Our flange air spool is compatible with modern metal body submersible pressure gauges as well as the Shearwater Swift and Pelagic Pressure Systems (PPS) wireless transmitters (branded Aqualung, Aeris, Hollis, Oceanic, Shearwater "legacy", Sherwood, and Tusa.) However, this style of air spool is not compatible with plastic body gauges manufactured by Pelagic Pressure Systems (PPS) for their parent company American Underwater Products (AUP, now defunct.) Sold by sport diving brands such as Oceanic and Aeris, the plastic body gauge was also supplied to some third party brands such as Sherwood and Genesis. The flange spool also is NOT compatible with the Garmin T1 wireless transmitter, which requires a special spool that is included with the T1.

All high pressure SCUBA hoses use an air spool, consisting of a spindle with two tiny o-rings, to mate the swivel connector on the hose to the fitting on the submersible pressure gauge (SPG). The air spool helps to form the seal between the SPG and HP hose and assists in controlling the pressure as it flows to the SPG from the first stage.

The appropriate air spool is typically included the SPG, not with the high pressure SCUBA hose. The shoulder spindle has a flange in the center and is by far the most common, compatible with most SPG's including all those sold by Dive Gear Express. However, a few SPGs (typically the inexpensive plastic body versions) may only accept a straight spindle without a shoulder. Some older 'classic' equipment may use a longer thinner bullet nose spindle. Devices that are normally screwed directly to the high-pressure port of the regulator instead of a hose, such as button gauges and wireless transmitters, do not need an air spool or may require unique versions.

If the o-rings on the spindle are worn the hose will have a small leak at the swivel. Even when an o-ring has failed completely or the spool is omitted entirely, a tiny flow restriction present in the high pressure port of the regulator and/or the male hose fitting will cause a leak to be much slower than expected. It is possible to just replace the #003 size o-rings on the spindle rather than replacing the entire assembly. However, with older spindles the ends sometimes break off entirely when trying to remove or replace the o-ring.