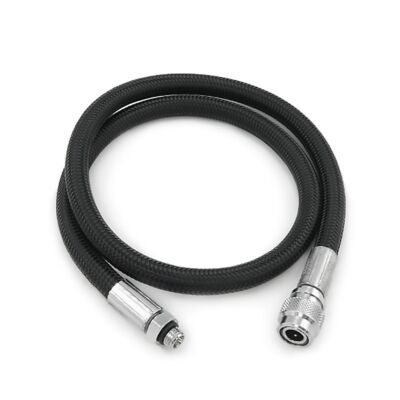 The typical low-pressure BC inflator hose is a 3/8-inch male at the end that screws into the first stage LP port, and at the other end is the Quick Disconnect BC female slide-lock Schrader valve fitting that accepts the standard BC inflator male QD post. Our most popular BC inflator hose is {22 in | 56 cm} long.

The extreme performance double braided SCUBA hoses manufactured by Miflex2™ are subjected to more than 30 individual performance and safety automated tests. All Miflex2 hoses are certified to conform to the CE EN250 standard and are Nitrox Ready.

Keep in mind that all SCUBA hoses will fail sooner or later either due to age, storage conditions or handling. Scuba hoses, regardless of brand and materials, require some minimal care. Do not allow hoses to receive prolonged exposure sunlight, as the heat and UV from strong sunlight will significantly shorten the life of the hose. Do not attempt to flush the inside of the hose with any form of solvent or other chemical, new hoses are factory clean and if you have any reason to think they are no longer clean then the hose should be replaced. Prior to every dive trip you should always pressurize and inspect your hoses for mechanical damage, corroded fittings, bulges and leaks. Dive Gear Express suggests replacing all SCUBA hoses every five years or 500 dives, whichever comes first.

For BC power inflator hoses with the ordinary quick-disconnect Schrader fitting, the most common length seen on the 'jacket' style BC is {26 in | 66 cm} or {28 in | 71 cm} because the large-diameter corrugated hose length is relatively long and most sport first stage regulators are 'fixed' port orientations which can result in less than optimal hose routing. Our observation of divers in the water is these one-length-fits-all hoses are often too long, causing the hose to 'bow' out and the inflator assembly to lay at an inconvenient or improper location with the resulting increase in drag. Using a shorter BC hose is particularly beneficial if the diver has added a powered alert whistle inline with the BC power-inflator.

For divers using back inflation, the typical length seen on the 'wing' style BC is {22 in | 56 cm} because the large-diameter corrugated hose is usually a little shorter on wings. This length generally works well on singles where the regulator first stage has swivel ports and on doubles where the hose will coming off the 5th port of the divers right post regulator. Some cave divers prefer a short corrugated hose where the inflator rests at their shoulder rather than their chest, and the BC power-inflator hose is typically {18 in | 46 cm} long. We don't have a recommendation for sidemount divers as the lengths are very sensitive to the configuration, but the {15 in | 38 cm} length is popular and we even see some sidemount rigs using {9 in | 23 cm} hoses, although with short hoses A-framing can be an issue.

BC integrated backup second stages are a special case and require a hi-flow quick coupling. You can not use a standard BC inflator QD hose Schrader fitting to supply a BC integrated alternate air source, as the device would not receive enough gas due to the flow restriction of a standard Schrader fitting. To replace the hose for one of these devices, you will need to use a {26 in | 66 cm} LP regulator hose plus a BC Integrated 2nd Stage Adapter.

Most drysuit inflation systems use the same fitting as found on BCs, but need a longer length. For drysuit divers, where the hose routes under their arm to a chest mounted power-inflator, the typical length is {30 in | 76 cm} or sometimes {36 in | 91 cm} depending on the locations of the power-inflator relative to the first stage supply. We've also seen some drysuit inflation systems which relied upon a special flow-restrictor orifice in the first stage fitting of the hose rather than in the inflator valve itself and while the drysuit inflator hose appears to be the same as an ordinary BC inflator hose, it is not the same. You should consult the manual that came with your drysuit to be certain your drysuit inflator valve can use a standard BC inflator hose.