Due to the unique nature of the product, this item is NON-RETURNABLE. Your complete satisfaction is our goal, so please consider carefully before purchase. Absorbent prices do NOT include free shipping.

Fresh Sofnolime IN STOCK as of January 2023

Sofnolime is also available for purchase in 32 keg pallets shipped by LTL freight, contact us for more information. 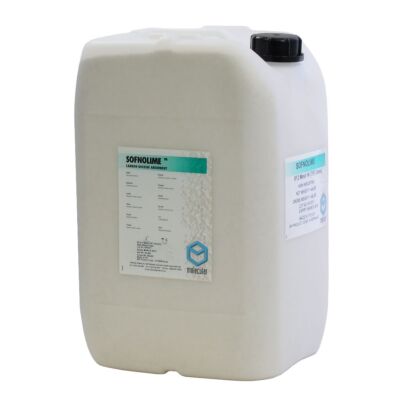 Molecular Products Sofnolime™ 8-12 Mesh NI (Grade 797) carbon dioxide absorbent is a 1.0mm to 2.5mm (1025) particle and has a triangular cross-section which combines to give a higher CO2 absorption capacity compared with other granule shapes and sizes. The #8 to #12 mesh granule size absorbs 150 L/Kg of CO2. The Grade 797 primary application is rebreather diving. This product is the NON-indicating version preferred by the military.

Sold in { 44 lb | 20 kg } heavy-duty reclosable keg containers. When stored correctly, Sofnolime containers maintain proper absorption capacity for five years. Our absorbent is fresh and it is stored in our climate controlled warehouse. Absorbent prices do NOT include free shipping. Dive Gear Express only stocks the NON-indicating version because U.S. Navy specifications for absorbent do not allow indicating formulations.

Sofnolime is classified under international and US Department of Transportation (DOT) rules as Non-hazardous for transport by road, rail, sea and air. Occasionally, transport personnel will incorrectly assume Sofnolime is a Hazardous Material (HazMat) and refuse it. Refer them to Section #14 of the MSDS that documents Sofnolime has no transport restrictions or UN Number.

The Material Safety Data Sheet (MSDS) can be found HERE.

Because there are a great many types and formulations of carbon dioxide absorbent, it is critical to use only the specific type of CO2 absorbent recommended by the manufacturer of your specific model rebreather. Use of the improper product can cause problems such as excessive work of breathing or shortened scrubber times. Proper storage is a necessity as well, in order to maintain the correct balance and distribution of moisture.

Rebreather divers and purchasing agents new to carbon dioxide absorbent are rightfully mystified by some of the terminology. As for the terms aDsorbent vs aBsorbent, that is a debate for another day, call it what ever you like... most experienced rebreather divers just call it "sorb". There are a lot of parameters that go in to describing a specific absorbent, but the most confusing are granule size, indication, and grade.

Granule Sizes -- Most absorbent is a mix of different sized granules. Modern specifications describe the particle size using millimeters and distribution using percentages. For example, by far the most popular granular mixture for rebreathers is about 80% of the particles ranging from 2.0 mm to 1.4 mm in size with nearly all of the particles being between 2.5 mm and 1.0 mm in size. There is a sieve standard for woven wire mesh where #8 aperture size is defined as 2.0 mm and #12 is 1.4 mm. This range of particle sizes is often referred to as 8-12 or sometimes 812. Another absorbent widely used in commercial diving is mostly larger particles from 4.0 mm to 2.0 mm with nearly all the particles being between 5.0 mm and 2.0 mm. This is mesh aperture size #4 to #8, referred to as 4-8 but often written as 408. There are many other sizes because a specific size or shape of granule is not always better than another, there are important trade offs that depend on the application.

Indication -- Some absorbents can optionally be formulated to contain dyes that temporarily change color to visually indicate chemical reactions that occur as carbon dioxide is being absorbed. The indicator colors are White-to-Violet abbreviated as WV or Pink-to-White abbreviated as PW; the absence of indicator is abbreviated as NI for Non-Indicating. Absorbent manufacturers claim the dyes used in their indicating versions do not have any adverse effects and do not affect performance. However, the purchasing requirements for some organizations now specifically prohibit the presence of any indicator dye in CO2 absorbent. Because the color change will reverse once the chemical reaction ceases, rebreather divers should not consider indicator a reliable method for evaluating scrubber stack usage.

Grades -- In the world of absorbent, the grade just identifies a specific formulation (ingredients, binders, moisture content, particle size and shape) that is highly optimized for a specific application. In some cases the same formulation may have multiple grades that differ only in their documentation as meeting a particular standard or purchasing requirement. There are many different formulations intended for different applications such as anesthesia, mine safety, submarine air purification, commercial diving, and rebreather diving to name a few. Using the wrong absorbent, such as substituting an anesthesia grade for a diving grade, can result in adverse consequences.

Sofnolime is the Molecular Products brand name for its soda lime formulations of carbon dioxide absorbent. A widely available Molecular Products absorbent grade used in commercial diving hyperbaric chamber systems is "Grade CD" which is generically referred to as 408. Some early rebreather designs still specify 408 absorbent, but today this is rare. The Sofnolime absorbent grade used in modern rebreather designs is "Grade 797", which is generically referred to as 812 by divers. The Molecular Products description of the CO2 absorbent soda lime formulation in 1.0 mm to 2.5 mm granule size (1025) sold by Dive Gear Express is Sofnolime™ 8-12 Mesh NI (Grade 797), whose primary usage application is semi-closed circuit and fully-closed circuit rebreather diving.

Be very careful, we have seen the various terms mixed up in to nonsense descriptions such as "Sofnolime 797, Grade 408WV" or "797 CO2 Adsorbent, Grade CD". In these cases the absorbent is probably the larger 4-8 mesh indicating formulation that is primarily used in commercial diving applications; typically lower cost but much less absorption capacity. The mesh size alone is also not adequate identification, there are alternative formulations of similar particle sizes intended for applications other than diving. Watch out too for indicating vs non-indicating, if it doesn't clearly state non-indicating (NI) in the description then you possibly could receive indicating.