The M28 is not a regular stock item at DGX and in some cases may not be in-stock at the US distributor. Please contact us regarding availability and lead time for delivery before ordering. Note that the M28 will be received with a current firmware load. You may need to update the firmware in your Poseidon CCR for compatibility. The M28 should NOT be downgraded to a previous firmware release. 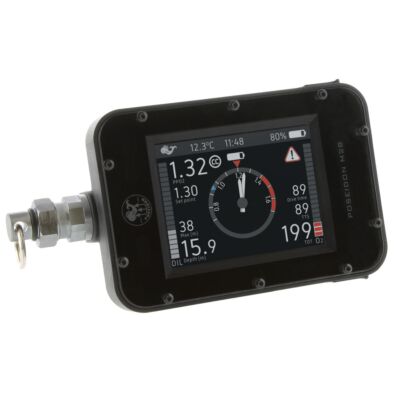 Note: The M28 can be used as a stand-alone dive computer and there are optional configurations to connect the M28 to other devices. A typical configuration is to connect the M28 to the SE7EN rebreather by replacing the display paddle or to monitor a Solid State Oxygen Sensor; to do this you will need to also purchase one or more of the Connecting Cable M2 (0000-690). When connected in CCR mode with the Se7en, the M28 currently only supports the DCAP algorithm. The M28 is described by Poseidon as having GPS and maps capability, but our current experience is that takes such a long time to acquire satellite data that GPS functionality is not useful in practice.

2
2 out of 5 stars
40%
1 Reviews
0% of customers
recommend this product
5 stars 0 (0%)
4 stars 0 (0%)
3 stars 0 (0%)
2 stars 1 (100%)
1 star 0 (0%)
Sort by
Rating
Newest
Helpfulness
Erik G.
Verified Buyer
I don't recommend
this product
Reliability is a Concern
2
The initial unit I received had a problem with the depth sensor, which as I have learned plagued a number of early units (purchased August 2017). The unit had to be shipped back to Sweden for repair, but it was fixed at no charge other than shipping (pricey to insure an $1800 item to Sweden). Recently I had an issue where the computer just would not accept a charge or start up. Through communication with other owners I resolved that issue on my own. I will say that all communication with Poseidon in Sweden was great, and as mentioned they did fix my computer. It is a lengthy process however to ship to Sweden, await repairs, and receive the computer back (it amounts to a lot of missed diving). With the issues, it has been successful for me on six dives so it has been an extremely costly item per dive thus far. There are a lot of features but accessing a lot of them are not the friendliest to include the process of updating the firmware to the unit. The battery life is a concern, especially since you need to have access to a USB charger to charge the battery. I'll keep my fingers crossed that the unit continues to be improved through firmware updates but as of now I feel like I'm clinging to hope to justify the purchase.
Was this review helpful? 5 0
Product Attachments

Lithium-ion batteries and products that contain lithium-ion batteries can expose you to chemicals including cobalt lithium nickel oxide, and nickel, which are known to the State of California to cause cancer and birth defects or other reproductive harm. For more information, go to www.P65Warnings.ca.gov.