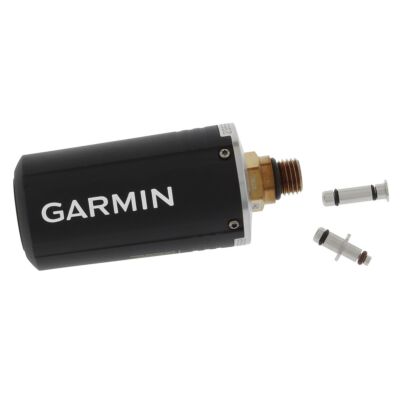 Get tank pressure and battery remaining sent to paired compatible Descent dive computers that will then also compute gas time remaining and gas consumption rate. Monitor up to five (5) transmitters via SubWave™ sonar technology so you can dive with multiple tanks or monitor transmitters of other divers in your group when they are within {33 feet | 10 meters}. The T1 can be mounted directly on to the standard HP port of a SCUBA first stage or with the addition of the included swivel adapter (aka "air spool") it can be installed on the end of a high-pressure SCUBA hose. Often called "air integration", the T1 tank pod is currently only supported by the Garmin Mk2i model dive computer. The T1 tank pod is NOT supported by the Mk1, Mk2 (without the 'i'), Mk2s, or G1 models; nor is it compatible with any other brand of dive computer.

The Descent T1 Transmitter should always be installed using either a flow restrictor or an air spool, both included with this kit. Which one is used depends on the method of installation. The flow restrictor should be installed on a Descent T1 when it is attached directly to the high pressure port on a first stage regulator. When the T1 is attached to a high pressure hose, the air spool should be used. Using the transmitter without either the flow restrictor or air spool could result in serious injury or death from an air pressurization failure. Refer to the Descent T1 Manual for more details.

In rare cases, the body of some first stage regulator designs will have hose ports oriented such there is not room to accept a wireless tank pressure transmitter without interfering with hose routing. The solution is to use a standoff adapter, or some divers prefer to use a short HP hose in place of the standoff. All high pressure hoses use an 'air spool' with two tiny o-rings to mate the swivel connector on the hose to the fitting, and the T1 package includes a special air spool for use with standard HP hoses. The design of the T1 tank pod is such that it's use with a standard HP hose requires the special air spool included with the transmitter package.

The T1 communicates underwater with the MK2i using an audible sonar signal, meaning the T1 emits a half second "chirp" every 4 seconds. Garmin says the sound is normal, and the volume can be lowered by reducing the power setting of the T1 and in some cases by repositioning the T1. Most divers (especially those that wear a hood) don't notice the sound or find it indistinguishable from background noise, but some divers do report finding the sound of the T1 transmitter to be annoying.

Not available to ship outside the United States

3
3 out of 5 stars
60%
2 Reviews
50% of customers
recommend this product
5 stars 1 (50%)
4 stars 0 (0%)
3 stars 0 (0%)
2 stars 0 (0%)
1 star 1 (50%)
Sort by
Rating
Newest
Helpfulness
Dirx
Verified Buyer
I recommend
this product
Works as it should with the MK2i.
5
Works great with the MK2i. I have not had any issues with battery life and provides a lot of post dive data in the app. In warm water I can hear the subwave but only at times in a dive and while it is audible, it seems to go away due to just getting use to it or if my head is turned the other way I cannot hear it. I don’t think I’ve noticed with a hood on in cold water. Either way, it’s not an issue. No sync issues even when I forgot to make sure watch and T1 were “talking” at the surface before dive. Easily replaceable battery is great as well. Will update if any issues.
Was this review helpful? 2 0
MZK
Verified Buyer
I don't recommend
this product
If you can hear air leaks when an oring is damaged, do not buy this transmitter. If you are deaf go for it.
1
The Garmin MK2i is a good smart watch and a good dive computer. It is definitely not a Teric but it is a good dive computer. However, the transmitter is noisy. It is not clearly said on Garmin website but it is noisy. Apparently some people does not hear the noise (older divers for exemple). None of my dive buddies complained so far so I assume the noise does not propagate very far. According to the user manual you can reduce the noise by reducing the range of the transmitter but even in this configuration you can hear it and if it is attached to your first stage you will lost connection regularly during the dive (I tried in both sidemount and single tank configuration). I tried to attached the transmitter to a high pressure hose and attached it to the lower front part of my BC and yes I found a configuration where the connection is relatively stable and I do not hear the noise too much but it is not what I paid for.
Was this review helpful? 0 0
Response from Admin
Yes, the Garmin Descent T1 Tank Pod Transmitter uses SubWave™ sonar technology. By definition, sonar is a system for the detection of objects under water by emitting sound pulses and detecting or measuring their return after being reflected.
MZK
Yes I agree with you but sonar can work with frequency not audible by human. The audible frequency range for humans is typically given as being between about 20 Hz and 20 kHz. Sonars can work with waves with frequencies anywhere between few Hz and several hundred kHz. "Subwave sonar technology" does not give any information on the frequency used and the user manual does not provide this information. Of course people should read the user manual before to buy something. However, I think most of the people assume transmitters are not noisy so Garmin should explicitly say the sonar is using audible frequencies.
Product Attachments

Some dive computers have the ability to monitor a sensor that allows them to provide a digital display of the gas pressure in the dive cylinder. This feature is often referred to as 'air integration' (AI) but since nearly all modern dive computers are capable of handing a variety of breathing gases the term air is a misnomer. A few of the AI computers go a step further and use the tank pressure to calculate an estimate of the breathing gas time remaining (GTR). There are a variety of different methods and formulas for GTR calculations but they all share limitations such that, for specific divers and specific dives, the GTR displayed by your computer can be wildly inaccurate.

Just to be clear, the accuracy of the GTR is not a limitation of the computer or the transmitter but because there are simply too many unknowns to make the GTR anything other than a gross approximation. Beyond the obvious factors such as environment, depth variations in a multi-level dive profile, ascent rates, and stop times; the divers gas consumption rate will vary greatly depending on changes in equipment configuration and exertion. For this reason, GTR estimates are meaningless on most technical dives and even some deeper sport dives, particularly if hunting.

Another factor that can affect the GTR depends on the algorithm used for making the estimate. Some methods require the diver to know and enter an RMV consumption rate along with the volume of gas available (i.e. 'tank size'). Other methods use an observed SAC rate to develop a prediction based on consumption history and may optionally require the cylinder rated service pressure be entered. Computers that calculate GTR based on observed SAC rate history are particularly problematic when the diver uses different capacity cylinders on different dives.

While the GTR can be useful in warning inexperienced sport divers when gas consumption is abnormally high, Dive Gear Express does not recommend relying upon dive computer GTR estimates to control or extend the dive time. Never allow the computer GTR estimate to become part of your dive plan, always closely monitor your actual tank pressure.